Progress on the book this December has ground to a halt. It’s not something I’m deeply concerned about as the run up to Christmas has been organising gifts and various other bits. The same thing occured last year but that was a stretch from around October to the following March of nothing much getting done. As long as this current black out doesn’t go that long then we’ll be okay.

2018 was a strange year in that I didn’t really ‘finish’ any writing project. Whilst the first draft of ‘The One Who Left’ was finally done it’s in no readable state right now to anybody bar me. From the point of view of creating stuff for consumption it didn’t quite reach there this year.

But the better news from this year was podcasts. I’m involved in the pro wrestling podcast The Conquistabores and it’s genuinely a fantastic feeling to be talking about old wrestling events with my co-hosts.

Then came The Polis Box.

I first heard of the Doctor Who podcast from up North in that Edinburgh when a link to a near empty WordPress blog popped up on Twitter. The first episode went up inviting people to send in evidence fir or against the particular Who story they were covering at the time. I started sending them tweets mainly to get the kick of having my name read out. Tweets led to emailed options which then turned into recording audio files for them to drop into the show.

Then, in February this year, Lee messaged me asking if I wanted to be part of the podcast full time. So it came to pass that I got the train from Lockerbie to Edinburgh in March to block record three episodes. Dave and Lee were both fantastic company and very welcoming to the awkward Gretna boy who was confused by the big smoke. I went back for more in June and there are more around the corner.

Podcasts are great fun. If somebody could just pay me to talk into a microphone then that would be cool.

The biggest 2019 aim is to get this book done and out there. If I can get a second draft done by March 4th then it’ll mark two years since I wrote the first words on it. That would seem like good timing.

If you’ve been reading this blog since the start in 2012 or if you’ve jumped on in 2017 I wish you all the best for 2019. I don’t often put photos on this blog (bit difficult when it’s about writing) so have a failed selfie with my cat. 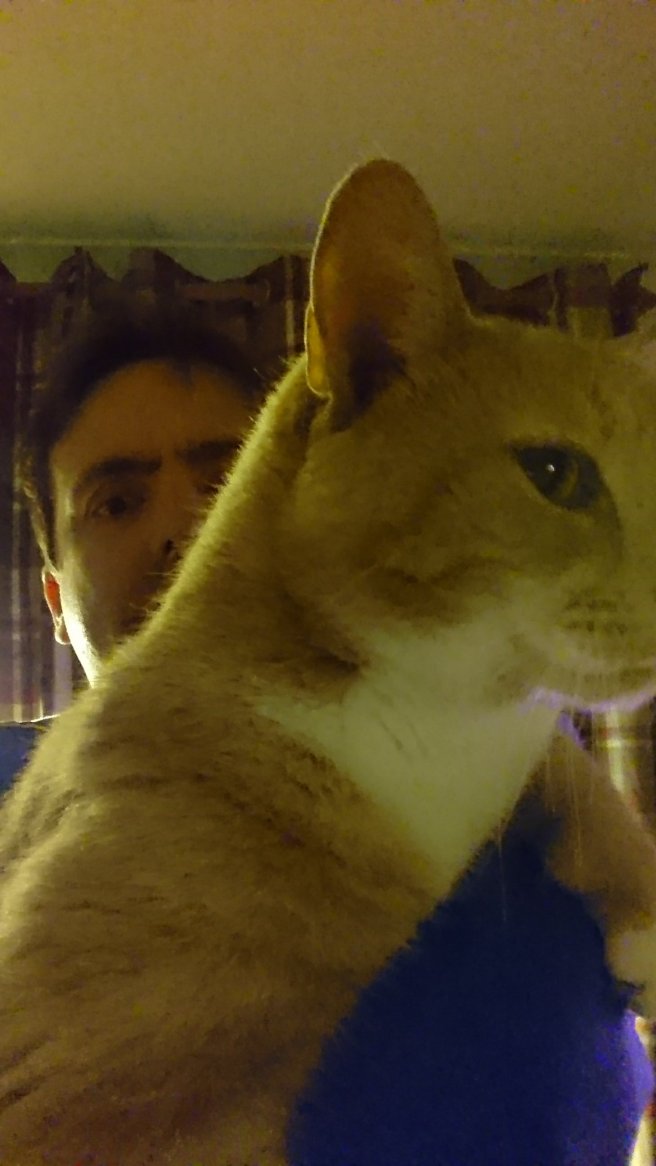 You know the Spiderman story in which Peter Parker gets the black suit which expands his powers beyond all of Peter Parker’s dreams but turns him into a complete arrogant bastard? Well that was me when I got a microphone in my hand on a stage.

It was The Brickyard in Carlisle when I had a slightly unusual booking. It wasn’t for a outright comedy gig but for a dating auction. A group of film makers were trying to raise money for their latest project and their producer had the idea to get five single lads and five single girls together, organise dates and let people bid to go on those dates with them. They needed somebody to be auctioneer and, seeing as the producer was a long time friend of mine, I took the job. It remains the only gig I was ever given entrance music for. The wrestling fan in me knew this would be the closest I would get to entering a room full of people to music. For some reason they chose Soft Cell’s ‘Tainted Love’ which worked at the time.

I walked onstage with my leather jacket slung over one shoulder, went up to the mic which was set at the correct height seeing as it would just me me using it, grabbed it, mustered my sleaziest voice possible and said “Good evening lovers”. This might make it sound like I’d been drinking beforehand but I always made it a rule not to, I did every gig sober and drank afterwards. What followed was three hours of absolute mayhem, fueled by me being a pretty obnoxious swine to all involved. The first half had the lads up with the girls bidding. Upon noticing that this seemed like a far too heterosexual set of rules I suggested that any blokes who fancied the guys on show should just bid for them as well and we’d be done with it. I was greeted with five men suddenly getting really, really scared.

The bidding for the guys was slow and never really went above £20. The dates were drawn at random by each couple once the bidding was done. The local cinema had given two tickets to a film of the couple’s choice, an Italian restaurant had donated a voucher for a three course meal for two and the bowling alley had given away free games so it was good stuff they had lined up. The highlight of the bloke’s half was when one guy, who was fairly good looking in his own right, was gaining a lot of interest until he raised his arms and revealed massive sweat patches around his armpits. Bids for him stopped suddenly after that. When the girls went up for bids the place really went crazy. One girl got up on stage and twirled around a bit before telling me she wanted it mentioned in her intro that she was Spanish. I opened with “Here’s Lot Number 7 punters, she’s Spanish so imagine the possibility of blow jobs and paella”. Yes, I actually said that in front of an audience. No, I’m not proud. She actually ended up going for £275 which was quite a different set of circumstances for the small beer the lads had gone for. By the end of the night my throat killed, I was downing water just to carry on and I’d thrown the auctioneer’s hammer into the audience like a rock star would throw a guitar plectrum. The night had raised £1500 for the film, it ended up being something based on songs by The Manic Street Preachers.

The team making the film had apparently been of the opinion they’d be onto a good thing if they got £200 out of it. As far as the money return went the night had been a great success, as far as I’d gone personally it wasn’t mainly because I’d spent an evening winding up a crowd and seemingly getting away with it. In all seriousness I was shocked nobody punched me out there and then.

In the meantime I’d been asked to do a gig in Edinburgh, an event which would mean I’d spend the rest of my days saying the phrase ‘it wasn’t during the Fringe’ over and over again. In April 2003 I was due to support John Scott at The Pleasance Bar. The student paper (yes, them again) got a hold of it and I was interviewed by now Blue Peter presenter Helen Skelton who was on the journalism course at the time. During this interview I made the fatal error of suggesting that it was a bit much for the paper’s resident opinion columnist to refer to Scotland as ‘Jockland’ in the last edition. As a result the whole thing was published as me being some kind of staunch SNP supporter based in Carlisle accusing the paper of being racist. It was published three pages away from the rubbish review of the Cafe Solo gig. It wasn’t a good news month really.

Edinburgh itself was terrible. Upon arrival my girlfriend and I couldn’t find the hotel so got a taxi outside Haymarket, the taxi driver bellowed that it was ‘just around the fucking corner’ and wanted to boot us out of his cab before taking us very begrudgingly towards our destination. The crowd at Pleasance Bar  was minimal to say the least, a smattering of people lumped around the room. There was a small room at the back with photos of people who had performed there previously including a big one of Harry Hill which amazed me at the time. My set started with my eulogy for my dear departed Uncle Roderick and ended with me going searching for Saddam Hussein with two Americans in the audience. I was pretty obsessed with Iraq at the time for some reason, mainly because I thought I was the British Bill Hicks.

Years passed by without me going back onto a stage, I graduated from college in 2004 and never really had an desire to do stand up again. I thought at the time that anger was the best thing to go into comedy with but I’d lost all  that drive once I graduated. As a result I’d become slightly disillusioned with the whole thing and wanted to concentrate on writing for a career. Also, as previously detailed, I didn’t like the attitude performing live gave me. There was a certain arrogance that flowed when I was up there that had developed very quickly and terrified me when I thought back on it. When looking back I got the impression that, whilst it had been fun at times, I wasn’t that great at this stand up lark as I thought I’d been at the time. Sure I could hold an audience’s attention but my imagination didn’t work fast enough to keep the ammunition running. With that and the ‘evil microphone syndrome’ I was having a very minor version of Jekyll and Hyde going on. It was time for the evil one to die. He did have one last stand though, at Solfest 2006.

Alan Whittaker had asked me to do a short gig on the Drystone Stage which he put the bill together for. It was the first comedy gig I’d ever done when I was offered payment and my wife was pregnant so I thought it best to earn extra cash if I could. I’d been told that whilst it was a family festival they would be okay with ‘edgy humour’. In reality, upon walking on stage, the heavens opened meaning that pretty much everybody left the area leaving me to joke about Boy George’s cocaine habit with a bunch of seven year olds who had stuck around. These people had been entertained all afternoon by gentle folk musicians, they were suddenly greeted by shouting Scotsman. I stuck out like a sore thumb and was about as popular. I left the stage, walked past the tents and flags, got back to my car and drove home. The pay cheque arrived four weeks later. Back in Edinburgh John Scott had said ‘Get your money first’ and during the drive home I really regretted not heeding his advice. There were a few whispers afterwards of me being ‘misbooked’ meaning I was on the wrong stage at the wrong time but there wasn’t much we could do about it afterwards. The thought of standing up on a stage again to perform makes me cringe. Other comics make it look pretty effortless and one of my favourites, Stewart Lee, admits that he tries to lose audiences on purpose during gigs just so he can see if he can bring them back in.

I honestly wouldn’t have the skill to do that, I’m much more comfortable writing when I can edit and refine to a point which I know it’s ready for consumption. This isn’t to say I regret doing it, I’ve mentioned it in two job interviews since (and got both jobs) as it’s certainly something to stick on the CV and make a talking point. If you ever get the chance yourself then I’d recommend doing it as you never know what you’re going to be like until you get up and do it. It’s what I was like afterwards that was the only major concern.