When I’m planning scripts one of the main things I get paranoid about is making sure something is happening in each scene. It might be my lack of confidence in just having conversations between each character but there’s always the nagging need to have some kind of threat. I’m currently looking at the complete scene by scene of Parallel and getting worried that some parts are just conversation. Act one is establish paradigm, act two is breaking it and act three is resolving it but making it different to the start. That’s the classic Hollywood way. 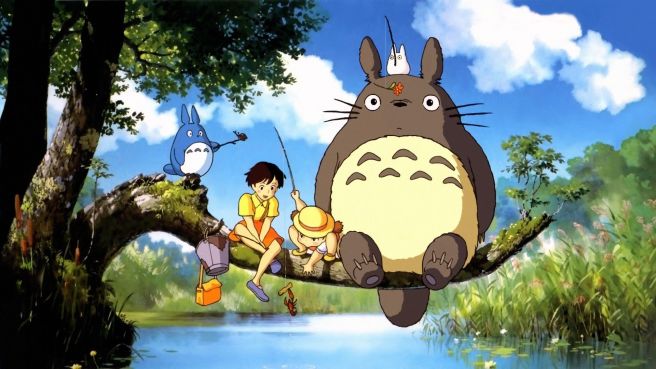 I was watching the Studio Ghibli classic ‘My Neighbour Totoro’ for the first time last week and I loved it (as did my nine year old son). What struck me was that not a great deal actually happens in the hour and a half long film. There’s also a lot of plot points that aren’t explained fully in any way.

Two girls move into a new family home alongside their father. Their mother is absent as she’s sick in hospital. What disease has struck her down remains a mystery for the entire film. The house they now live in looks haunted and they discover soot sprites almost as soon as they arrive.

Whilst the older girl is at school the younger discovers two small creatures in the garden. One is like a small rodent and the other is a smaller, ghostly version of the same thing. Why one of them is a spirit is not explained. She follows these creatures into woodland when she discovers Totoro, a much bigger version of the creature who doesn’t talk and seems to like sleeping.

Usually, if this were a Western film, there would be some form of danger straight away. Totoro would be under threat somehow, the local village would see him as some kind of ghostly monster. The family would stand in front of the tree defending their friend. Instead, not much really happens until they receive a telegram from the hospital and the family all try to make it there in time. Totoro conjures an imaginary bus which is shaped like a cat to get the girls there in time to they can deliver corn on the cob (no, really). You never find out of the Mother recovers or if she manages to join the rest of her family in the new home.

Totoro seems like a wistful dream in which events move along at a steady pace only really to pick up for the last fifteen minutes. I imagine a scenario if them doing a Western remake and a producer tearing his hair out asking where the danger is and how all this resolves. As stated before, this doesn’t mean I didn’t enjoy the film but it does make me think about how I lay out my scripts. Do I, as a writer, back away from the power of human relationships?

Parallel currently sits at about twenty pages and I’ve looked at it a couple of times now. I would have loved to have just pressed on with it and I always tell others about the need to forget about how bad you might think your script is and just finish it. The current incarnation though has enabled me to see how the idea would play out and it isn’t that great. I’m tempted to rip it up and start again. Writing anymore right now in this current state would seem to be like building on dodgy foundations just to get a house finished. Pretty soon it’ll fall down completely, probably before you’ve moved in.

I had a substantial email exchange with Jsquared who had a look over what I had so far. She came up with a fantastic point by mentioning she wasn’t too hot on the setting being space. Most science fiction films she’d had seen had featured outer space and she was pretty tired of it. Perhaps she’s right.

So maybe I’ll change the setting to underwater. This group have been placed deep down in the ocean (for reasons I have yet to work out). The shuttle of this version is replaced by a mini submarine which doesn’t cause any great trouble in rewrites. Also, the visual of water slowly dripping in through cracks in the station as it slowly disintegrates is far better than it just losing air.

This also means I’m getting a Bioshock vibe off it and it’s fine by me.