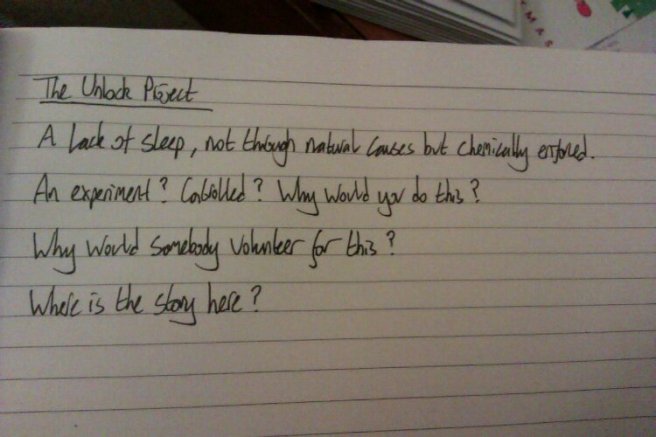 Every single idea starts this way, a few scribbled lines in the notebook. It’s a way of mapping out the first few thoughts.

I had a short story idea a while ago about a central character who couldn’t sleep. It sounded a bit thin of a premise and insomnia has been used before in many a story as a basis for paranoia. What then, if the central character was being kept awake on purpose? For research? For some kind of scientific project?

The other consideration is that it must be cheap to film which means one set and as few characters as possible. I want somebody make this at the end, a massive budget would put anybody off. It a great challenge for a writer to think on these boundaries. I remember a local news story about a young film maker who offered the medical use of his brain on eBay to raise money for his ‘Lord of the Rings inspired epic’. The story was about how he was stopped from doing this as eBay counted it as selling body parts. My point would be though that he was either copying Peter Jackson with £10 in his pocket or he thought his brain was worth £100 million.

My first port of viewing for a cheap, single character sci-fi film for the basis of this script would be ‘Moon’ directed by Duncan Jones and starring Sam Rockwell. Go watch, you’ll soon get the vibe.